VIEWPOINT: Teresa Borsuk reflects on her career in a still-male dominated profession 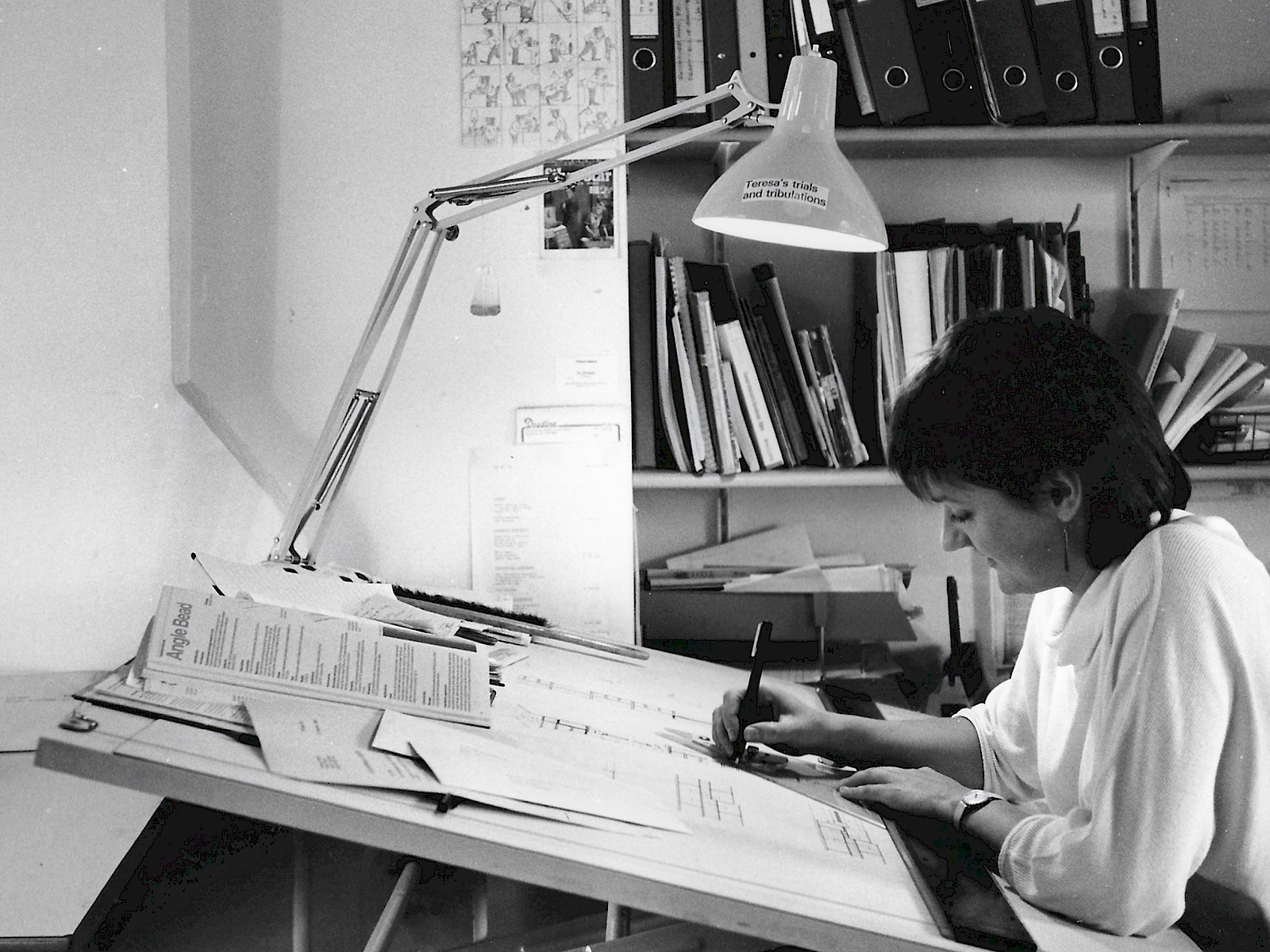 The week started with International Women’s Day, a moment to celebrate achievements and how far we have come. At the same time, the RIBA have just unearthed “lost” lectures from 1986 of four significant women architects, Jane Drew, Elaine Denby, Rosemary Stjernstedt and Patricia Tindale. Reminding us that there is still a way to go…

But seemingly, Pollard Thomas Edwards stridently soldiers on, as it always has, ploughing its own furrow. I believe that we can boast more women at senior management level that any other comparable architectural practice. So, what is it in PTE’s 47-year history that has enabled this?

I joined in May 1984. What I had heard of it then was that the practice was “good at housing” and that it had an unusually high number of women employees. So far so good.

Remember, this was the mid-eighties. The percentage of qualified female architects was in single figures; the lad culture of the construction industry was acceptable and site huts, and even the journals were full of images of scantily clad women.

I had just left an architectural practice where I had had to defend myself as a woman in the profession. It is difficult to pin down what the issue was exactly, but every day presented an unnecessary challenge. Initially I thought it was inevitable and good training, telling myself “If I could deal with this, I’d be able to cope with most things”. But ultimately it was draining, and one day I resolved that I did not have to put up with it any longer – and began to search for a new job.

Just to put this into context. Before this I had worked on two construction sites - on what was then the National Westminster Tower (now Level 42), as well as the conversion of a Victorian barn into a community centre in Bolton, where I was the “gaffer”. I had experienced no sexism there. Working on site was excellent training. Aside from understanding more about building, I learnt about myself and how to handle being the only woman amongst a mass of men.

I arrived at Pollard Thomas Edwards. It was refreshing from the start.

Roger Pollard, Bill Thomas and John Edwards (the founding partners) recognised that since we spend so much time at work it should be an enjoyable place to be. They set out to create a family ethos. 55 Colebrooke Row (the office at the time), fashioned a homely setting. Thursday lunch is a custom that has taken place since the start of the practice. They do say, “the family that eats together, stays together”. The congenial vibe extended beyond office lunch and embraced a strong sense of social responsibility. To the founding partners, a balanced workplace and work force was not different or special, it simply reflected real life.

I am reading “Making Space: Women and the Man Made Environment” published in 1984 by Matrix Architects, and soon to be the subject of an exhibition, “How we Live Now” at the Barbican. For those of you who do not know, Matrix were a 1980s feminist design co-operative, who ultimately struggled to survive as a business and were embedded into PTE in the early nineties. The book “challenges the great macho myths of metropolitan architecture”. What I had not known is that in 1918 the British government set up a Women’s Housing Sub-Committee to advise on “housewife’s” needs in the design of new state-built housing. (Traditional gender roles were taken for granted.) Their report demanded a separate workroom for cooking, a kitchen range that did not involve stooping, a separate bathroom, a front parlour, labour saving devices such as hot and cold running water and children’s play spaces. Homes fit for heroines. Their influence was evidently transformative, but their recognition for this “lost” over the years, just as the RIBA lectures were.

Back at PTE, there was, and never has been an overt policy or deliberate attempt to create a gender balance, rather, a conscious effort to engender a social and cultural environment which supports equality, diversity, and inclusivity.

We do not need the McKinsey report to tell us that that companies perform better where there is gender balance and diversity. What the founding partners realised is that equality in the workplace is good for everyone. It demands an inclusive approach. It challenges embedded precepts. It broadens (architectural) thinking. It shifts the perspective and makes for better, more inclusive buildings and places. It enriches outputs. It evidently makes good business sense.

Today, the business case for inclusion and diversity is stronger than ever. Balance begets balance. It is obvious isn’t it?

Next article
Challenge the brief, but respect the author