Why retrofit is not always the answer

Most townscapes are surprisingly robust. They can take a knock or two and still ‘work’. London’s is no exception. Consider the multi-storey car park off Rye Lane in Peckham the top two floors of which since 2007 have played host to an annual arts exhibition, Bold Tendencies, and a very popular rooftop bar and restaurant. It’s probably my favourite London building. More importantly, it’s a brilliant example of re-use, and I’m sure it would have pleased the AJ’s RetroFirst campaigners had they been arguing their case a decade or so ago. Its success led Southwark Council to pick a developer to fill out the remaining floors below with shops, restaurants, studios and like and given the building had always nestled an independent cinema in its base, the complex as a whole became one of London’s most popular cultural destinations of the 2010s. Even its stairwell is a hit – on Instagram at least. Painted hot pink, it has garnered thousands – maybe millions – of likes.

I mention the RetroFirst campaign here because we at Pollard Thomas Edwards are signed up to its core messages: a level VAT playing field for refurbishment projects, planning policies that promote reuse and an onus on publicly funded projects to properly assess retrofit options alongside redevelopment. And I mention The AJ because its recent coverage of Coronation Square in Leyton - our scheme for 750 new homes and extensive public realm and community facilities for the London Borough of Waltham Forest and Taylor Wimpey - points out that our development will involve the demolition of Penoyre & Prasad’s 2005 Score Centre, a sports facility that occupies much of the project site. And while the coverage was welcome, it did make me think: even though there were no objections to the planning submission regarding the centre’s demolition, couldn’t we have done a Peckham at Leyton, and worked the Score Centre into our new plans? 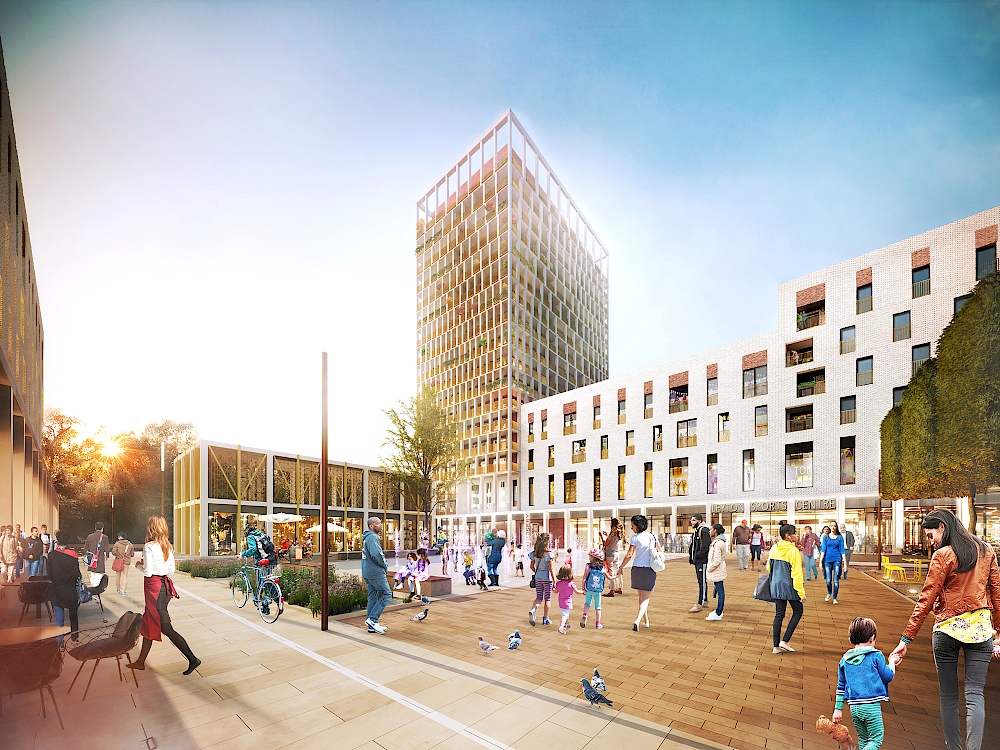 The Score Centre was certainly well-used by locals, and as Coronation Square architect Justin Laskin says, it had high design aspirations with “a dramatic folding roof form and interesting skylights in the main community halls akin to Sarah Wigglesworth’s Siobhan Davies Dance Studios, built around the same time.”

But if we dig a bit deeper, its qualities suggest maintaining it within the new plan would have been problematic. Its sports hall for example, a tensile fabric portal frame structure never intended as a permanent solution, doesn’t provide a thermally-controlled environment meaning winter use is out, and sauna-like heat for much of the summer. It doesn’t have a sprung floor either, in the sport hall or community facilities, restricting play, theatre and dance across its facilities. It doesn’t have much in the way of storage either, once again limiting its flexibility in regard to community needs. As for the outdoor sports grounds? They have all been relocated to a nearby site with improved facilities.

Some of these points, you might say could have been addressed with a retrofit. Perhaps. But at what cost? Because the bigger challenge here is one of location – the existing building is in the middle of the site; its icon-inspired aesthetic, a bit of Modernism here, a splash of sci-fi there – making it more costly to adapt; and its low density - just 1-2 storeys straddling a third of the available land. Together these factors not only make reworking it more labour – and carbon – intensive, it limits the amount of new housing and public realm the site can reasonably maintain.

Our approach, as ever, was consensual and thorough. CABE for example, had reviewed the original brief from LBWF as well as the competition bid responses, and had also been part of the scoring process that awarded us the scheme. In short, they were already well versed in why the facility needed to come down.

And as Justin says: “It was always part of the council’s brief for the site. By the time we went to CABE’s Design Advice Panel last year, it was a foregone conclusion that the building had to go.” The DAP chair incidentally, was Gillian Horn of Penoyre & Prasad.

Apparently, even during the CABE site visit no one asked why the Score Centre had to come down. Says Justin:

We had a generally positive discussion with CABE, but they made significant - and good - comments and we made significant changes in response. None of the comments were to do with the removal of the existing facility.”
“

Indeed, the discussion was very much focussed on our new proposal. With good reason. Coronation Square is a piece of city with a variety of functions – a sustainability story in itself in regard to how to use urban land efficiently - but let’s focus on the new thermally controlled, Sports England-compliant leisure provision we are creating.

Firstly, it will be served by the same district heating network (DHN) that will power the entire development as well as all future developments coming forward in the area, up to 2250 new homes in all.

Secondly, it is a third bigger in terms of sports provision and flexible community space. It has nearly three times the nursery facilities currently available (which in truth it will need, given the amount of new homes we are placing on site) but we’ve also added a new local health hub, a new market hall with flexible workspace and incubator pods for local aspiring makers. None of this would have been possible with the restrictions imposed by retaining the existing facility.

In all, as Justin tells me, there are also a host of enhancements that make Coronation Square, “a very sustainable proposal” from SUDS and photovoltaics to more green space and massively reduced carbon emissions for a scheme of this size.

And while the comparison with Peckham is perhaps unfair – the embodied energy in that mass of concrete floors would be huge compared to the Score Centre making demolition a truly insensible idea - I think it’s fair to say that Coronation Square works hard - very hard – to minimise its carbon footprint and champion energy efficiency in new build housing and efficient people-centred use of urban land, a point in fact, that unites it with Peckham Car Park.

As for what else we could learn from Peckham there’s always the hot pink stairwell…Actually, no.

You can read more about Coronation Square here.